This documentation describes how to work with Orcas.

For this documentation, the simple-example is used, for information on how to install and run orcas refre to the correspponding instructions of your favorite build-tool:

With Orcas all tables (and other database objects) are stored in plain text files. These can be placed in any version control along with the other sources of the project.

The task of Orcas is to read these files, compare them with an existing database schema and execute the necessary database changes.

For example in the examplethere is a table named “categories”.

It is defined in a file called “categories.sql”: 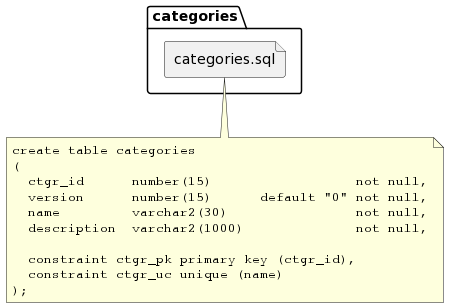 If the new column “image_location” is inserted: 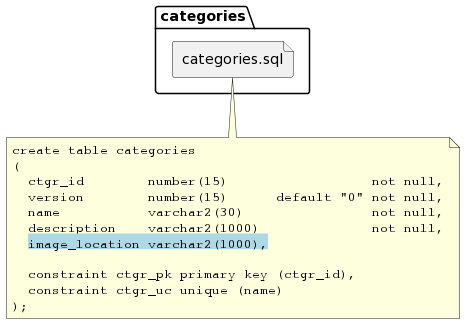 Orcas will add the new column to the database: 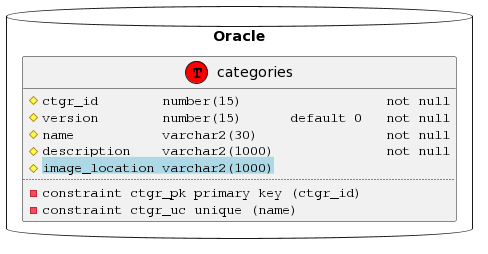 In the same way you would perform other changes like:

There are two changes that are blocked by default:

Both changes are applied, if the table is empty (or if the column only conatins null values). In the simple-example example it will initially runwithout errors (because all the tables are empty initially). But if you write data into the tables, then this leads to an error message.

Notices: If an error like this occurres no changes are made to the schema, thus it can’t happen that a transfer was only “half” performed.

This lock can be avoided with the so-called “dropmode”. In the simple-example example you need to change the entry dropmode=”false” into dropmode=”true” in the build.xml.

**It’s generally not recommended to activate the “dropmode”, because in some instances (import of an old version/ Merge error / renaming) it can lead to data loss.

Extension of the data model

In typical products 90-95% of the changes to the data model are extensions, which can simply be handled by Orcas.

Modification of the data model

Changes that do not directly refer to data (eg to expand the Index by a column) are usually also handled by Orcas.

But as soon as a data migration is required, Orcas can no longer recognize the necessary changes by a simple comparison. These include the use cases Rename a table and Rename a column.

Orcas provides one-time-scripts for these scenarios. These are scripts which are only executed once on any database schema.